You are here: Home / Media / Outside | If You Build It Surfers Will Come 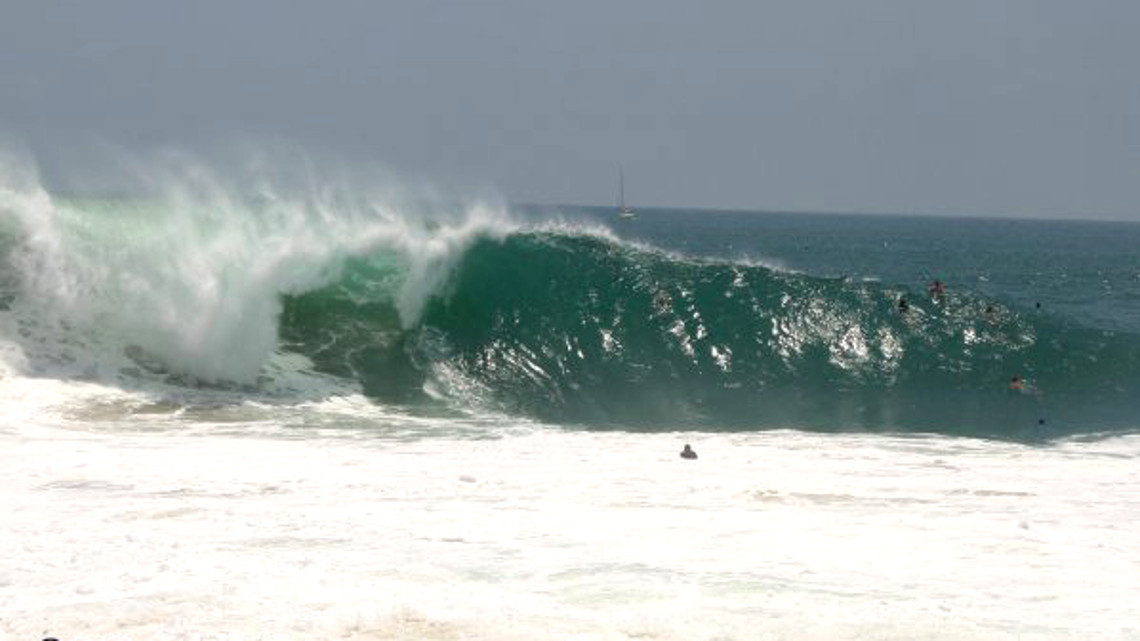 First Peak was certainly an inspirational wave. So much, that by studying and understanding the mechanics that made First Peak tick, we can apply this technology at other locations around the world; such as in Cocoa Beach. Ben Yeager of Outside Online interviewed the First Peak Project and some local Partners in Brevard County who are trying to bring this amazing technology to life.

A cat-five hurricane provided the fuel in that case, but most of the Wedge’s might is man-made. Alterations to Newport Harbor in 1936 accidentally created one of America’s premier waves and most dangerous bodysurfing spots. Swells bounce off the jetty and combine with incoming sets at a 45-degree angle, making a double wave that breaks against the shore in a cavernous barrel called a “rebound” wave.

The Wedge, once famously described by a local as “the closest thing to the great trauma of being born,” is the world’s quintessential example of a rebound wave. But it isn’t the country’s only one. In fact, many straight piers can naturally enhance waves, insofar as they alter beach topography. Waves peak reliably on either side of them, and a rip current underneath helps surfers paddle out. But the piers don’t typically create a mechanism for waves to actually break better, as the Wedge does.

The only other epic rebound wave in the country is in Florida’s Sebastian Inlet, or First Peak, an East Coast surfing mecca responsible for shaping the talent of locals like Kelly Slater and the Hobgood brothers. Here, about 40 miles south of Cocoa Beach, Florida, a jetty juts out at the perfect oblique angle to reflect waves into a rebound, even though recent construction has diminished its power.

The Wedge and First Peak were both built accidentally. Now a group of Floridians want to mimic that phenomenon in the world’s first intentional enhanced-surf arena. And the payoff for the area—and its surfers—could be huge.

In January 2013, Mayor Dave Netterstrom and a handful of Cocoa Beach residents proposed the construction of a new 1,300-foot city pier that, if built, would be the longest in the East Coast. This month, Tim Chastain, who runs eco-tours in Cocoa Beach and came up with the original idea, wrote a detailed proposal for the structure. Though his proposal doesn’t include a finished design, Chastain said the discussion could include experimental surf enhancements. Two local surfers and coastal engineers, John Hearin and Justin Enjo, whose company Wave Loch builds artificial waves, suggested back in October 2013 that they could make the pier the first intentionally-built wave-enhancing surf stadium in the world.

Why not do something truly unique and build the first pier that’s designed for surf enhancement? says Hearin, who also works as a professor of marine and environmental systems at the Florida Institute of Technology. But the devil is in the details.

There are currently two possible designs under discussion. The first is fairly straightforward: The concrete pier would extend in a straight line perpendicular to the shore, designed to withstand hurricanes. It would serve as a linear surfing stadium with spectators—much like those at the Huntington Beach Pier—lining its rails to watch competitions.

The second idea goes a step further. It outlines a plan for an unprecedented “dog-legged” construction of a three-part pier. The first and third segment will be perpendicular to shore, but the middle part, lined with siding made from aluminum grating, will sit at an oblique angle to the north to reflect swell into a “rebound” wave, just like at the Wedge or Sebastian Inlet. Designers would space the pilings closer together to close the surface, and would introduce a sabellariid worm, called “Worm Rock” that would attach itself to the siding, turning it into a living reef. This would provide habitat for fish and crustaceans and bounce swell off the wall.

It would work like this: When a set approaches the pier, it will hit the sandy bottom and peak. The waves will then reflect off the walled section of pier and alter the angle at which swell hits the beach. Most of Florida is beach break, where swell comes straight on and “closes out,” or breaks parallel to the beach all at once. It’s pretty much impossible to surf. Thanks to the innovative pier, waves would roll in at a 45-degree angle in a peeling, continuously breaking manner. The reflected wave wouldn’t necessarily be bigger, but heavier and more powerful, creating barrels instead of weak, crumbling waves. The result: perfect surfing.

As great as the design would be for surfers, Chastain fears the excess cost could prevent the pier project (which isn’t exclusively about surfing) from gaining traction with the city.

Any surfing enhancement is experimental,” he says. “And an experimental pier puts your project at risk.” Chastain is wedded to the idea of a pier, but he doesn’t think the additional surf enhancements are necessarily worth the extra money. The radical design could put funding in jeopardy. And why go overboard when a pier will already enhance surfing, at least to some extent? “When you think of where you are as a Floridian, it’s piers,” he says. “It’s where you can drop your kids off at a safe place. It’s old Florida.

Engineers in Florida are hesitant to throw money into wave enhancements, as they are notoriously expensive. A 2008 artificial reef plan in Brevard County was scuttled due to a $5 million initial cost. It’s a risky undertaking.

But Enjo, with Wave Loch, doesn’t think wave enhancement would be a major additional cost, and it could be a huge economic boon for the city. The Surfrider Foundation studied the economic benefits of Trestles, a break in California, and valued it at $26 million a year. A similar study by the Save the Waves Coalition valued Maverick’s, the big wave spot in Half Moon Bay, California, at $23.8 million a year. “Our philosophy is we can prove this market exists,” Enjo says. “The challenge is convincing the non-surfing governance to get into it.”

But a region needs high-quality waves to attract the tourist volume of places like Hawaii, Indonesia, and California. There’s a direct correlation between wave quality and what tourists are willing to spend, Enjo says. It comes down to creating a wave that can become a marketable resource.

Right now, the proposal is still in limbo and will take years to move into a building stage. The pier is estimated to cost around $9 million and would bring an estimated $1,650,000 annual benefit to the area, according to Chastain’s proposal, serving as a community hub for fishing, surfing, shopping, and walking. But it’s pending an application process, public comment, and construction of a physical model. A 2008 feasibility study downplayed the financial benefits of surfing, Enjo believes, because very little surfing economic data was available at the time. But now there’s plenty of evidence to support how lucrative a world-class wave can be.

I think the Wedge is a good example,” Enjo says. “But the Wedge only works on a really big summer swell. So it has a narrow user base. In Cocoa Beach, there would be year-round benefits.